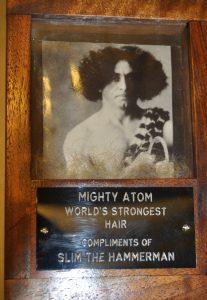 In June 1911, shortly after Joe Greenstein arrived in Houston, Texas, he resumed a wrestling career that had been interrupted in his native Poland when rising anti-Semitism drove him to join relatives in America. In 1914, however, a friend shot him between the eyes and set him on a different path. As the story goes, the bullet flattened against his forehead, sparing his life and sparking a lifelong interest in the connection between mental power and strength.

As The Mighty Atom, he performed standard strongman feats of strength, but his signature stunts usually involved his hair, with which he pulled a 32-ton truck, bent steel bars, and even held back an accelerating airplane. This lock of what is surely the strongest head of hair the world has known was collected and donated by his protégé, Slim “The Hammer Man” Farman. The Mighty Atom continued to perform strongman stunts until just a few months before his death at age 84.