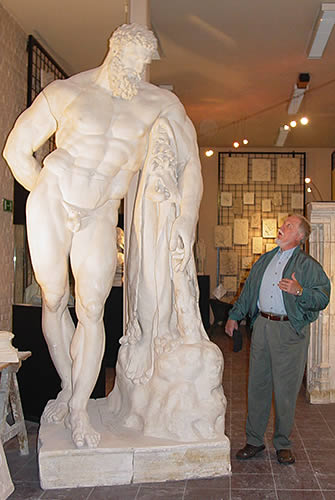 As a research center at The University of Texas at Austin — one of the nation’s major research universities — the Stark Center is dedicated to:

We define Physical Culture as the various activities people have employed over the centuries to strengthen their bodies, enhance their physiques, increase their endurance, improve their health, fight against aging, and become better athletes.

The academic discipline known as Physical Culture (or Physical Culture Studies) explores physical, nutritional, and therapeutic regimens and their relationships to the body, human movement and elite performance.  It does this through historical, sociological, anthropological, and gender and race-based approaches.

History of the Center

The H.J. Lutcher Stark Center for Physical Culture and Sports (Stark Center) was founded by UT faculty members Terry and Jan Todd who began collecting materials about physical culture and sports well before they joined the faculty at The University of Texas in 1983. Terry first became aware of the shortage of materials in most libraries on physical culture and sports training in the late 1960s, as he was working on his doctoral dissertation.  However, Todd discovered during his research on strength training in American schools that there were a few private collectors of physical culture materials in the United States and as he came to more clearly understand the importance of these materials for academic research, he became determined to help save them for future scholars.  After marrying Jan Suffolk (Todd), who soon shared his passion for both lifting and sport history, the Todds began actively collecting both contemporary and historic books, letters, photographs and manuscript materials in the hope that they would one day be able to create a true research library at a major university.

The Todds returned to Austin in 1983, bringing with them more than 380 boxes of books, magazines, photos and ephemera that they had collected to that point in time.  A $25K gift from Terry’s former weightlifting coach, Roy J. McLean, and the gift of Mclean’s own collection of strength-related materials that same year marked the official beginning of what is now known as the H.J. Lutcher Stark Center.  McLean’s donation, and a subsequent gift from his widow, Nell McLean, established the Roy J. McLean Endowed Fellowship, the first endowment connected to the Stark Center.

Before 2009, the Todds had no staff other than themselves and student volunteers (Kim Beckwith, Ph.D., for example, began her role with the Stark as an undergraduate volunteer.) and so the Todd-McLean Collection was open to researchers only on a limited basis.  However, the Todds continued to dream of one day being able to properly house and staff their major research collection.  That dream became real after the UT Football Team won the National Championships in 2006 and the Athletics Department decided to move forward with the construction of a new building at the North End of the football stadium.  UT Athletics Director DeLoss Dodds supported the Todd’s proposal to move their collection to the new building and a 27,500SF space was allocated for the Center.  The only caveat was that the Todds would have to raise the funds to build the Center.  And so, the Todds turned to the Nelda C. and H.J. Lutcher Stark Foundation of Orange, Texas for the lead gift of $5.5M that covered the Center’s construction costs and named the Center in honor of former UT Regent Lutcher Stark.   An additional $2M from Joe and Betty Weider and the Joe Weider Foundation to help with operations and exhibits, allowed the Center to move into its new home in the Fall of 2009 and to open the Weider Museum of Physical Culture and the adjacent sports galleries in the Spring of 2010.

The Center is now recognized by the Olympic Committee as an official IOC Research Center (one of only three in the United States), and it has played an increasingly important role in the preservation of the history of UT Athletics. The Stark Center now holds the UT Sports Media Relations Archives as well as personal papers and other memorabilia from many UT athletes and  such UT coaching greats as Jody Conradt, Augie Garrido, Clyde Littlefield, Mack Brown, Harvey Penick, Pat Weiss, David Snyder and Wilmer Allison.

The desire to increase scholarship has always been the rasion d’être behind the Todd’s quest to build a library centered on physical culture and sports.  To promote this area of academic inquiry, they established the academic journal Iron Game History: The Journal of Physical Culture in 1990 which continues to be published. The back issues of the journal are now fully searchable and can be found here.  A book series with The University of Texas Press has also been established to facilitate the publication of books related to the history of physical culture and sports.  Finally, the Department of Kinesiology and Health Education has also created two academic degrees in this area—the BS in Physical Culture and Sports and a doctoral program called the Ph.D. degree in Physical Culture and Sports Studies.

As the Center now has full-time staff who have cataloged and described many of the collections, the interest in using the Center for research has grown exponentially.  The Center’s library is used by hundreds of University of Texas students each year and by both on-campus and off-campus scholars from a variety of academic disciplines. International scholars from Canada, Italy, Iceland, Austria, Germany, Scotland, Australia, New Zealand, England, Norway, South Africa, France, Denmark, and Ireland have used the Stark Center for research since 2009.  These scholars and the many American faculty and graduate students who visit likewise represent diverse academic areas including departments of History, American Studies, Women and Gender Studies, Anthropology, Classics, Art, Art History, Folklore, Exercise Science, Communications, Journalism, and Sport Philosophy, Sport Sociology and Sport History. The Center has also assisted researchers working on a wide variety of popular books, documentary films, and other projects. In recent years, thanks to funding from Rogue Fitness, of Columbus, Ohio, the Center has also made considerable progress in digitizing a large number materials which can be seen on our new Digital Library page. The Stark’s virtual library and exhibits have enabled scholars around the world to access materials from our Collections in ways not previously possible.

Finally, although Terry and Jan Todd began the Center, it would not exist without the generous support of many individuals, corporations and foundations who, over the years, have made both financial and material contributions to the Center.  Click here to learn more about the Stark Center’s funding story and our current endowment campaign.