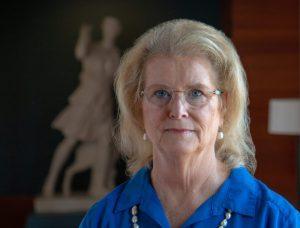 Stark Center Director Jan Todd is the  the Roy J. McLean Centennial Fellow in Sports History, and the Interim Chair of the Department of Kinesiology and Health Education.  at The University of Texas at Austin, Todd founded the PhD program in Physical Culture and Sport Studies and teaches classes in sport history, the history of physical culture, history of sports medicine, and women and sport. An active lecturer, Todd was named the Seward Staley Honor Lecturer for the North American Society for Sports History (NASSH) in 2008, and the D.B. Dill Lecturer for the American College of Sports Medicine in 1998. She received the NASSH Honor Award for her contributions to the field of sport history in 2013.  She is Past-President of the North American Society for Sport History, the largest association of academic sport historians, and was awarded one of the highest academic honors in her profession by being elected a Fellow in the National Academy of Kinesiology in 2011.

Todd is also the executive editor of Iron Game History: The Journal of Physical Culture, a scholarly journal covering the history of physical culture, that she and her husband, Terry Todd, founded in 1990.   She has published more than 90 scholarly articles during her academic career—nearly all of which have dealt with some aspect of the history or practical application of strength training, and she has also written three books. Her newest book: Strength Coaching in America: The Historical Evolution of the Most Important Sport Innovation of the Century with Jason Shurley and Terry Todd (University of Texas Press) was released in December of 2019. Her earlier books include Physical Culture and the Body Beautiful: Purposive Exercise in the Lives of American Women  (Mercer University Press, 1998), and Lift Your Way to Youthful Fitness (Little-Brown & Co., 1985, with Terry Todd).  She has also written dozens of popular articles in health and fitness magazines and has made more than 150 presentations at academic conferences, or by invitation, on topics related to strength training and/or the history of strength. For seven years she also ran a program for the City of Austin in which she and her graduate students trained women to become stronger so they could become firefighters. She is also the producer and historical expert for a series of documentary films, funded by Rogue Fitness, currently available on YouTube. Fullsterkur, their 2018 film about strength in Iceland was honored as a “Marquee Entry” at the 2018 Austin Film Festival.

Recognized as a pioneer in the history of women and weight training, Dr. Todd’s interest in the study of sport and physical culture began with her own participation and personal success in the sport of powerlifting. During her career, Sports Illustrated and other magazines often described her as “the strongest woman in the world.” As a powerlifter, Todd set more than 60 national and world records (in five weight classes) and was included in the Guinness Book of Records for over a decade.  She was the first woman to total 1000, 1100 and 1200 pounds, and the first woman to officially lift 400 pounds in the deadlift and 500 pounds in the squat. She was also the first woman to lift the Dinnie Stones in Scotland, and with Larry Pacifico, she set a two-person record in the deadlift of more than 1100 pounds. In the late 1970s and 1980s, she appeared on dozens of TV shows, including The Tonight Show, I’ve Got a Secret, CBS Sports Spectacular, and several Guinness World Record specials.

Todd was the first woman inducted into the International Powerlifting Hall of Fame and was in the first class of the USA-PL Women’s Powerlifting Hall of Fame. She received the 2008 Oscar Heidenstam Foundation Lifetime Achievement Award for her contributions to the field of physical fitness and has also been honored by the Oldetime Barbell and Strongmen Association and The National Fitness Hall of Fame for her myriad contributions to the strength sports.  In March of 2018, she was inducted into the International Sports Hall of Fame at an event in Columbus, Ohio and, in March of 2019 she—with her deceased husband, Terry Todd—received the Arnold Sports Festival’s prestigious Lifetime Achievement Award.

With the death of her husband, Terry Todd, in July 2018, Todd is now Director of the Arnold Strongman Classic and the Rogue Record Breakers competitions at the Arnold Sports Festival.

The Commissioner of Power: A documentary about the life of Terry Todd (and Jan) and the founding of the Stark Center: https://www.youtube.com/watch?v=dgqdmIKH-1E (90 minutes-debuted at Austin Film Festival)

Levantadores, about stone lifting in the Basque region of Northern Spain (2015; https://youtu.be/vck32S27RmM)

Stoneland,  which explores the strength culture of Scotland and Todd’s lifting of the Dinnie Stones (2017; https://youtu.be/MhQlNwxn5oo) (has been viewed more than 25M times)

The Alcalde: How Two Powerlifters Founded One of UT’s Most Unique Places

Things find their way to the Stark Center in many different ways.  Some items are donated by organizations that reach...

In 2011, the Stark Center celebrated the opening of the Joe and Betty Weider Museum of Physical Culture; it was...

For 15 years renowned artist David Deming and I shared The Forty Acres—as we call UT’s main campus—but our paths...

Please Watch for Updates on Reopening. Some of the most beautiful photos ever taken show a totally still body of...

I am proud to announce the launch of The Strongman Project a new web outreach of the H.J. Lutcher Stark...

In December of 1973, I took a workout at the Texas Athletic Club in Austin, Texas, and tested myself for...

On Monday, March 2, 2020, I met my graduate course, The History of the Sport Industry in America, at the...

To wish you all a Happy Valentine’s Day, we thought we’d share this 1950s children’s Valentine depicting a strongman and...