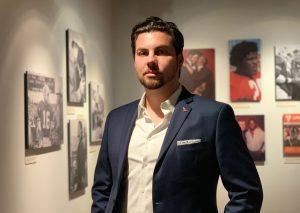 Kyle R. Martin was born and raised in Austin, Texas. He graduated cum laude from St. Edward’s University with a Bachelor of Arts in English Writing & Rhetoric: Creative Focus. He won third prize in the Austin Chronicle’s 2011 Short Fiction Contest and went on to publish more fiction and essays with Foxing Quarterly, Fields Magazine, and Ambit Magazine (UK & Europe), among others. He first arrived at The Stark Center in September 2014 when Jan and Terry Todd hired him as a library assistant. After nearly four years, he left to start his own design firm, KRM Exhibit Design, and has worked on exhibits for The LBJ Presidential Library, The Briscoe Center for American History, and The Stark Center. In January 2020, he officially returned home to The Stark Center as the curatorial associate.

With the new year approaching, it’s time to mark your calendars for the 2023 Physical Cultures of the Body Conference...

As many of you may remember, the winter storm in February 2021 caused an immense amount of damage here on...

The H.J. Lutcher Stark Center is proud to host ART TALK, a conversation and reception with the artist David Deming,...

Because of the pandemic and that stagnant period of time before vaccines were available, I (like most people) suffer from...

The H.J. Lutcher Stark Center for Physical Culture and Sports announces the premier and theatrical release of The Commissioner of...

In celebration of tomorrow’s Juneteenth holiday, I’ve published a new Feature over at The Strongman Project all about the life...

May is Asian American and Pacific Islander Heritage Month, which provides an opportunity for our nation to pay tribute to...

This week at The Stark Center, I’ve been thinking a lot about the history of women’s fitness and physical activity...

After last year’s cancellation due to the COVID-19 pandemic, the Clyde Littlefield Texas Relays are back! This year’s meet is...

In honor of Black History Month, I wanted to celebrate by sharing this issue of Ebony Magazine from May 1952....