Every day or so, beginning today, I plan to breathe a metaphorical song into the air.  That song, as it does in the second and lesser-known stanza of a poem by H.W. Longfellow, will fall to earth “I know not where.”  I hope that my songs, like Longfellow’s, eventually fall to earth just as his did.

For the most part, I plan to sing about what we’re doing, have done, and hope to do at the H.J. Lutcher Stark Center for Physical Culture and Sports here at the University of Texas.  As I do this, I ask for forbearance and even feedback from those of you who stumble onto these halting efforts of mine.  As an aspiring blogger I couldn’t be more of a greenhorn.  In fact, although many will find it hard to believe, the blog I’m writing today is not only the first one I’ve ever written; it’s the first blog I’ve ever read.  In any case, I hope I can have even a tiny fraction of the success I once saw Bill Kazmaier have at the Braemar Games in Scotland three decades ago when he flung a 56-pound ring-weight over a bar set at 16’2” and broke a Highland Games World Record–in an event he’d not only never practiced but an event he’d never even seen.

But as I’m neither a Kazmaier nor a Longfellow please don’t judge me too harshly.  Bear with me as I get my bearings on this venture out of the world of books and newspapers and into the wide world of the worldwide web.

I’ll close my first song by noting that just a few minutes ago I heard the drilling stop in our archive area where a crew of men is laying down track on the concrete floor and installing a system of electronically-controlled shelving called “compact shelves.”  As in so much we’ve done through our long years of trying to build and house a comprehensive collection of material about physical culture, broadly defined, we’ve been lucky in the matter of shelving—much as Clint Eastwood’s William Munny was “always lucky when it came to killing folks.”

In our case, just when we had to admit that even though we had well over a hundred large bookcases in our new facility we still needed a lot more, we learned from a friend that a medical center near Austin had recently digitized its records and had to dispose of almost 50,000 feet of linear shelving.  So we made a call and before long we were given—given–over two miles (!) of compact shelves, which had we bought them would have cost more than $400,000

The shelves work sort of like a concertina, and they allow approximately twice as many books or magazines to be stored in a given space as can be stored in traditional walk-through library stacks.  Normally, compact shelves rest tightly against each other, but when a particular book is needed a librarian simply pushes a button for a particular shelf and the tightly-packed shelves roll apart on tracks and separate at the shelf which holds the desired book.

It was, of course, costly to have the shelves disassembled, brought to the Stark Center, and reassembled, but what it cost was nowhere near $400,000; and now we have more than enough room to hold all of our books, magazines, photos, posters, correspondence, training courses, videos, films, and so on.  And we also have room to “grow” the collection, which we fully intend to do.  As I said, we’ve often felt blessed by good luck when it came to our collection.  I feel like singing. 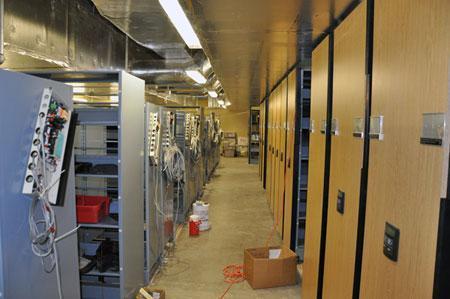 Body of WorkFilled with Power