My first message dealt with one aspect of the practical side of the Stark Center—the two miles of compacting shelves that are now being installed in our Archives area.  Today I’d like to touch on the aesthetic side of the Center—the side that speaks to beauty.  As most of you probably know, considerations of beauty, broadly defined, have been a part of physical culture for millennia, and as we’ve worked with the people who are helping with the design of our space we’ve done our best to make the Center beautiful as well as practically useful.

For this reason, I began a quiet campaign on the campus some years ago to convince the caretakers the Battle Casts to allow us to display some of them as part of our collection of physical culture material.  A brief history.  Beginning in the early years of the 20th century, the Battle Casts—exact copies made of plaster of famous ancient statuary–were assembled over time at the University of Texas by William Battle.  Dr. Battle was a professor in the Department of Classical Languages here before going on to become the department’s chairman, the Dean of the College of Arts and Sciences, and finally President of the University.  For many years the Battle Casts were the property of the Classics Department, but they were later owned and displayed by the Humanities Research Center here on the campus.  For the last several years, however, they’ve been under the care of UT’s Blanton Museum of Art, and some are on display there.

I first saw them when I was an undergraduate student here, and when I was in graduate school and took several classes in the Classics Department I was around them quite a lot.  They made a lasting impression on me, although by that time some of them had become somewhat dingy and shopworn.  Even so, I was struck by the remarkable skill of the sculptors who had crafted the originals, most of which were done in Greece more than 2000 years earlier, but as a budding iron gamer I also marveled at how very grandly real the figures looked, how filled with power.

During my years away from UT I never forgot them, and on several occasions when I’d come home for the holidays over the next 20 years or so I’d make a special trip to the campus just to see them.  Because of this long knowledge, one of the first things I did when I joined the faculty here in 1983 was to visit the Battle Casts at the Humanities Research Center, where some of the casts were on display.  By that time they had been skillfully restored to their original beauty and looked even better than they had when I first saw them.  Approximately ten years later, when it plans were being made to renovate Gregory Gym, where we first housed the Todd-McLean Physical Culture Collection, it appeared that we were going to be given a new and specially-designed space for our collection.  As a result, I went to the Director of the Humanities Research Center and asked if the Center would be willing to lend several of the more “athletic” of the casts to us once our new space was completed.  I explained that since most of the casts I wanted were in storage we could give them exposure and share them with the students and outside researchers who used our collection.  However, although the Director of the HRC enthusiastically agreed to do so the plans never materialized since the space that we would have been able to have in Gregory Gym was much too small for our growing collection.

Although we were bitterly disappointed at the time by this turn of events it was all for the best since in 2005 it began to seem possible that our collection would soon have a much larger facility in a much more prominent location.  Accordingly, as plans began to take wing for what has become the H.J. Lutcher Stark Center for Physical Culture and Sports I paid a visit to Jesse Otto Hite, the Curator of UT’s Blanton Museum of Art, and asked her the same question I’d asked the Director of the HRC ten years earlier.  Hite, a longtime lover of the Battle Casts, eagerly agreed to loan a half dozen of the casts for display at the Stark Center, and the new Director of the Blanton, Professor Ned Rifkin, recently visited the Center and gave the loan his full approval.  Five of those casts are now in place in the Center and the sixth—a seven foot tall rendering of Artemis, Goddess of the Hunt, is now being readied for the move from the Blanton.  The five we now have are:

These casts, besides adding to the overall appearance of the Center, help us to make the point that an interest in athletic prowess, proportion, heroism, and physical beauty is not a modern phenomenon.  It has ancient roots.  It speaks to part of what makes us human.  What’s more, for these striking, inspiring figures to be on display in a stadium devoted to athletes seems entirely appropriate because the originals of these marble and bronze statues were displayed in the ancient equivalent to our modern stadiums and training halls. 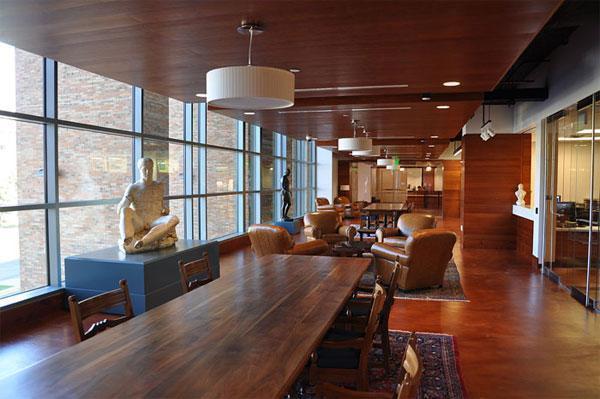