As a center for the history of sport and physical culture, the Stark Center benefits greatly from the rich athletics tradition of the University of Texas at Austin. Today’s short post looks at one of the sports in which the University of Texas has excelled for most of a century, tennis.  The Stark Center has holdings relating to two of the school’s most famous tennis coaches, Wilmer Allison and Dave Snyder. This post discusses images of the two coaches found in the Wilmer Allison and Dave Snyder Tennis Collection. These photographs give a brief insight into the mens’ respective tenure as UT’s head tennis coach. 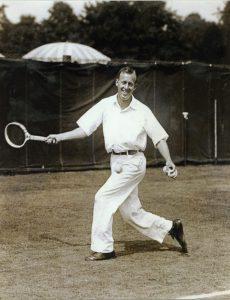 The first image depicts Wilmer Allison about to return the ball during his playing career.  After playing for UT from 1926-1928, Allison went on to become a highly accomplished player, meriting a place in the top 10 ranked American players from 1929-1935, and reaching the No. 1 ranking in the United States in the early and mid-1930s.  Wilmer Allison returned to the University of Texas in 1938 after a stellar playing career which included his defeat of Fred Perry at the United States Open Championships in 1935 after losing to Perry in the final of the same event the previous year. Allison achieved tremendous success in international tennis competition as well.  He performed well at Wimbledon, finishing second to Bill Tilden in men’s singles in 1930 and winning the Wimbledon men’s double championship teams in 1929 and 1930.  Davis Cup tennis, in which countries field teams in an Olympics style knockout competition, also benefited from Allison’s talent.  He was a key member of the United States team, achieving a 14-2 doubles match record for the squad from 1929-1938.

Allison coached men’s tennis at UT, assisting then head coach Daniel A. Penick from 1938 until 1957, when Allison took over the head coaching responsibilities.  From 1957 until his retirement in 1972, Allison continued to maintain the University of Texas as a perennial Southwest Conference and national contender, leading the Longhorns to four SWC titles.  Highlighting his renown, Allison was inducted into the International Tennis Hall of Fame in 1963. 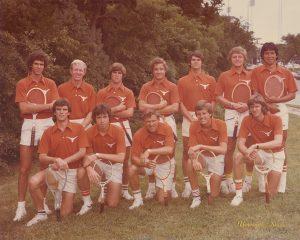 Moving from Allison to Snyder, the next photograph depicts Dave Snyder with the other eleven members of the Longhorn tennis team in their burnt orange tops and white shorts.  Snyder is on his left knee and is the third person from the left in the front row. Snyder played for UT from 1952-1956, helping the school earn the Southwest Conference championship title in 1954, 1955, and 1956.  His fellow team members elected him captain during the 1956 season and he won the SWC doubles championship the same year.

From 1972 until the end of his head coaching tenure in 2000, Dave Snyder continued the tradition of spectacular men’s tennis at the University of Texas; his teams won nine conference titles and qualified for NCAA championship play in 22 of his 28 seasons.  Snyder’s teams compiled an impressive number of dual-match victories—536 (represents 75% of dual-matches played)—during his time at UT.  When Snyder retired, he was ranked second among tennis coaches with an all-time victory total of 697 match wins.  His consistency as a head coach led to him being named the Intercollegiate Tennis Coaches Association’s National Coach of the Year in 1985.  Furthermore, when he retired in 2000, Snyder was the all-time winningest active NCAA Division I men’s tennis coach.  He became a member of the Intercollegiate Tennis Association Hall of Fame in 2001.

The University of Texas and its athletes have been fortunate to be coached by some of the most decorated men and women in their respective sporting endeavors.  The photographs and archival material comprised in collections like the Wilmer Allison and Dave Snyder Tennis Collection allow the Stark Center to take part in the celebration of the unique and accomplished men and women who have held head coaching positions at the institution.