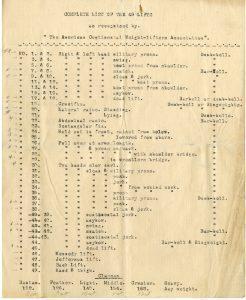 One of the most fascinating aspects of working in the Stark Center is the ability to work with personal letters from one physical culturist to another. This letter from George F. Jowett to Ottley R. Coulter represented a conversation between two prominent American physical culturists. In the letter, the two men discuss the foundation of the American Continental Weight Lifters Association (ACWLA).  Five years previously, Coulter wrote an article in Strength magazine calling for a way to standardize weightlifting in the United States. It was incredibly important to have a sanctioning body for American strongmen and weightlifters so that the general public would respect that lifting measurements were accurate and achieved honestly. The ACWLA would, it was hoped, fill this void.

Created by Jowett and Coulter, this organization was the first association to regulate both how weightlifting feats were performed and what the current records were. Showing their seriousness, the letter also cites respected individuals in the field, men like Arthur Gay, Robert Snyder, and David Willoughby, whom it is hoped, could be possible ACWLA representatives. Coupled with the closing discussion regarding the types of lifts to be used, the letter is packed with significance. For me, it stresses the difficulty involved in establishing such an important body as well as the passion of all those involved.

Finally, enclosed with this letter is a list of the forty-nine recognized ACWLA lifts.  This artifact illustrates how the ACWLA was designed to monitor and sanction lifts of many types to ensure that the public could trust that innumerable lifts were being performed in the same manner and with the same equipment across America.

To read more of the correspondence between Coulter and Jowett, visit our digital resources page by clicking here.