The Double Gift of Doris Barrilleaux

One of the most important gifts the Stark Center for Physical Culture and Sports has received over the past several years came to us from Doris Barrilleaux, a Florida great-grandmother with the energy level of a hyperactive hummingbird. What she gave us was her very large and invaluable collection of correspondence, magazines, posters, videotapes, audiotapes, and many thousands of photographs. Without question, the Barrilleaux Collection contains enough raw material for ten doctoral dissertations, and we hope to see at least one fairly soon. One of the most wonderful aspects of the gift of the Barrilleaux collection is that Doris, who’s a whiz with computers, digitized virtually all of the rare primary documents she’s gifting to us. It took Doris approximately six months of long days to meticulously scan every newspaper article about herself, every magazine article she wrote, every photograph of hers that appeared in a magazine, and most of her correspondence. Visitors to the Stark Center will be able to quickly access her collection because of the organizational work she did; it was an enormous effort for her –and we at the Stark Center are deeply grateful to her for this tremendous gift to generations of future scholars. 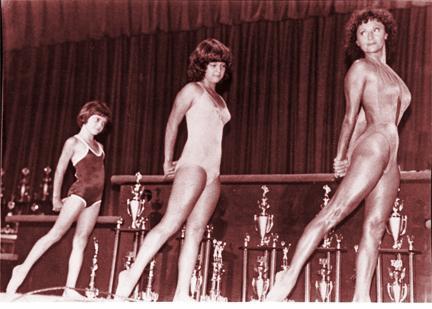 Over the years Doris also used her remarkable energy to rear five children, hold down a full-time job, become a prolific photographer, and almost singlehandedly launch a new sport—organized bodybuilding for women. Doris started weight training in 1955, after her children were born, but her interest in competitive bodybuilding began in 1977 when she began photographing bodybuilding competitions. She noticed that although comely, weight-trained women were often asked to present trophies at these shows, they were not asked to pose and thus receive recognition for their own physical improvement. Women’s only chance for a “body competition” at that time was in a traditional beauty contest, but that held no appeal for Doris. Doris was interested in earned beauty.

Back in 1962 Doris submitted a photograph of herself to Strength & Health magazine doing a double biceps pose, but it was returned with a request for a photo that was “more feminine.” She complied, and that photo ran in 1963; she continued to correspond with John Grimek, the editor. Fifteen years later, Grimek encouraged her to enter a bodybuilding contest held in Ohio, but she had never appeared on stage before. Even so she went, and encountered several strange rules. For example, the contestants had to wear shirts to have their lower bodies judged, and then don pants to have their upper bodies judged. She recalls the show as being “total chaos.”

After that she was asked to guest pose at several local shows, and the Tampa Tribune featured her in articles. Shortly afterward, at age 47 and by far the oldest woman entered, she took part in a contest in Pennsylvania organized by George Snyder. She was in good shape but not muscular like her male counterparts, and after the show, Frank Zane—who taught school in Florida–pulled her aside and said, “Doris, the world’s not ready for women bodybuilders!” That was all it took. She set out to prove him wrong, although 30 years later she thinks he may have been right.

In any case, in October of 1978 Doris, along with Suzanne Kosac and Linda Gleason, formed the Superior Physique Association, Inc.(SPA). They put in hundreds of hours contacting gyms, sweet-talking the media, holding regular meetings, and forming competition rules. Then, in April of 1979, they put on the Ms. Brandon Physique competition in Brandon, Florida. There were 13 contestants, and she not only competed but cooked for 50 people at the post-posing party held at her home.

Doris went on to win the Ms. Gold Coast that year for women over 35, but after that she was too busy with the administrative end of the sport to compete. The sport grew quickly because of her tireless efforts, but she believes that it was her appearance on TV’s Real People that really gave the women a boost. After she wrote them about a contest, the TV crew came to Tampa, covered the show, and also filmed her training at the gym and guest posing at nearly 50 years of age. Viewed three decades later, it’s easy to see that this show played a critical role in launching the sport nationwide. 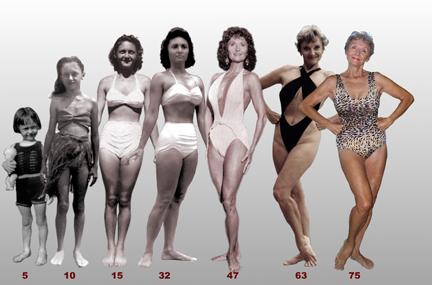 Almost immediately, Doris became a pop culture sensation, appearing on To Tell The Truth, What’s My Line, SportsWorld and 20/20, and the publicity was unfailingly positive. It wasn’t long before she received a telephone call that began, “Doris Barrilleaux, Joe Weider calling.” According to Doris, Weider then sent a reporter down to shoot one of their shows, but the other bodybuilding magazines also gave the women a lot of publicity. Muscle Training Illustrated made her the women’s editor and gave her a regular column, “Curves and Peaks.” And she also continued photographing and reporting the contests for all the other bodybuilding publications as well, especially MuscleMag International.

As a way to make weight-trained women more popular Doris specialized in photographing couples, and she’d submit these shots to all the “muscle mags” as potential covers. Although Doris says she isn’t certain of the number of covers she’s had, it’s almost 200, not including dozens of foreign language editions — which may rival any other photographer in the history of the iron game, man or woman. As the sport grew, Doris became more and more concerned with the increasing influence of anabolic steroids and other muscle-building drugs. She believes that although most women would love to have the body of Rachel McLeish at the time she won Ms Olympia contest, very few would want to have the bodies of the last few winners of this top contest.

In 1979 she co-authored Inside Weight Training For Women, and in1982 she was nominated for a Healthy Fitness Leader award in Washington, DC. Although she lost to Jack LaLanne and Richard Simmons, she considered it an honor just to be nominated. As to what happened to SPA, Doris reports that it grew until it had state representatives in all but two states and even had SPA branches in Europe. They held judges’ clinics, had elections, and operated with a board of directors. It was a large organization, but in November 1980, she received the royal embrace and was elected chairwoman of the International Federation of BodyBuilders (IFBB), and Ben Weider asked her to start a national organization for women, which she did–the American Federation of Women’s Bodybuilding (AFWB). 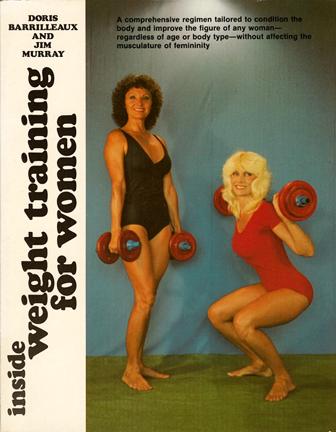 Although SPA as an organization fell by the wayside she continued to publish SPA News until 1983, when it was absorbed by a magazine Dan Lurie started called Body Talk—which only ran for one issue. During that period she also published a fitness book called Forever Fit, and was totally occupied with the AFWB. Between the IFBB and the AFWB, Doris was traveling to all the major contests around the world to judge, take photos, and cover the shows for magazines. She kept all the scoring sheets from those first major contests, and they were part of her gift to the Stark Center, as were several large cardboard boxes of old correspondence from people who supported her early efforts to promote women’s bodybuilding.

Doris’ last official function was to serve as the head judge at the World Championships in Australia in 1984. It was at this time that the National Physique Committee (NPC) was formed, and she was told that it was now illegal to have two separate amateur federations and that the AFWB would be absorbed by the NPC. Which it was.

For many years Doris continued to serve as the photo editor of Florida Muscle News, and photographed most of the contests in Florida, sometimes as many as 50 shows a year. A recent interest of hers is manipulating photography with the computer—photoshopping—and she’s very skillful at it. One of the things which particularly gratifies her these days is how the women’s fitness competitions—which feature and reward the very types of bodies which Doris always championed–have so completely overtaken women’s bodybuilding in terms of popularity as judged by how each body type is used on magazine covers and in the ads in bodybuilding magazines. She believes that a major mistake in the beginning of the sport was calling it “bodybuilding” instead of something like “body-shaping” or “body-sculpting.” She maintains that calling it “bodybuilding” opened the sport to the argument that you couldn’t logically put a limit on development, and she notes that as early as 1981 she suggested having two types of contests–one bodybuilding and the other body-sculpting. But no one would listen. At least now, she reasons, there‘s a place for both types of women. At the age of 78 she still receives requests for autographed current photos and she stays in touch with a great many people via email. She lives in a beautiful home not far from Orlando with a pool and a couple hundred feet of frontage on the Alafia River, where she often sees families of manatees paddling past her boat dock. She still trains regularly, rides her bike, eats moderately, and enjoys her role as a genuine iron game icon.

Having the Barrilleaux Collection securely housed in the Stark Center is a very great honor, as the primary source material it contains is priceless. Just like Doris.