In earlier blogs, several photos of Mark Henry have appeared and Joe Roark, the creator of a fascinating and authoritative forum-IronHistory– suggested that some sort of measurement of Mark’s shoulders should be made as it appeared that he might have the broadest shoulders on record in the iron game. Mark, not Joe! No laughing. Anyway, since Mark was in town yesterday for a brief visit I prevailed on him to drop by the Stark Center so we could make an attempt to measure his shoulder-width.

As a thoughtful person might imagine, getting an accurate shoulder-width measurement isn’t easy because—for one thing–it’s important to place any measuring device neither too high nor too low on the deltoids. An inch too high or an inch too low can make a significant difference. It’s also important for the arms to be held against the sides and not flared out by a flexing of the lats and the related shoulder-girdle muscles. Since we have a device here at the Stark Center that David P. Willoughby used to measure shoulder-width I hoped to use it, but it was too narrow. Undaunted, foraged through our work-rooms and found two straight pieces of wood, placed them at what I thought was the appropriate place on Mark’s shoulders. For my part, I attempted to keep the pieces of wood parallel to each other as Mark stood against a wall, held his arms straight, and placed his palms against his thighs. I actually believe that the pieces of wood which touched the wall were a bit closer together than they were when they were touching Mark’s shoulders. I tried not to fudge the measurement so that his shoulders would seem broader than they actually are, and in that effort I was pushing the sticks against his shoulders tightly—perhaps even depressing the flesh to a small extent. 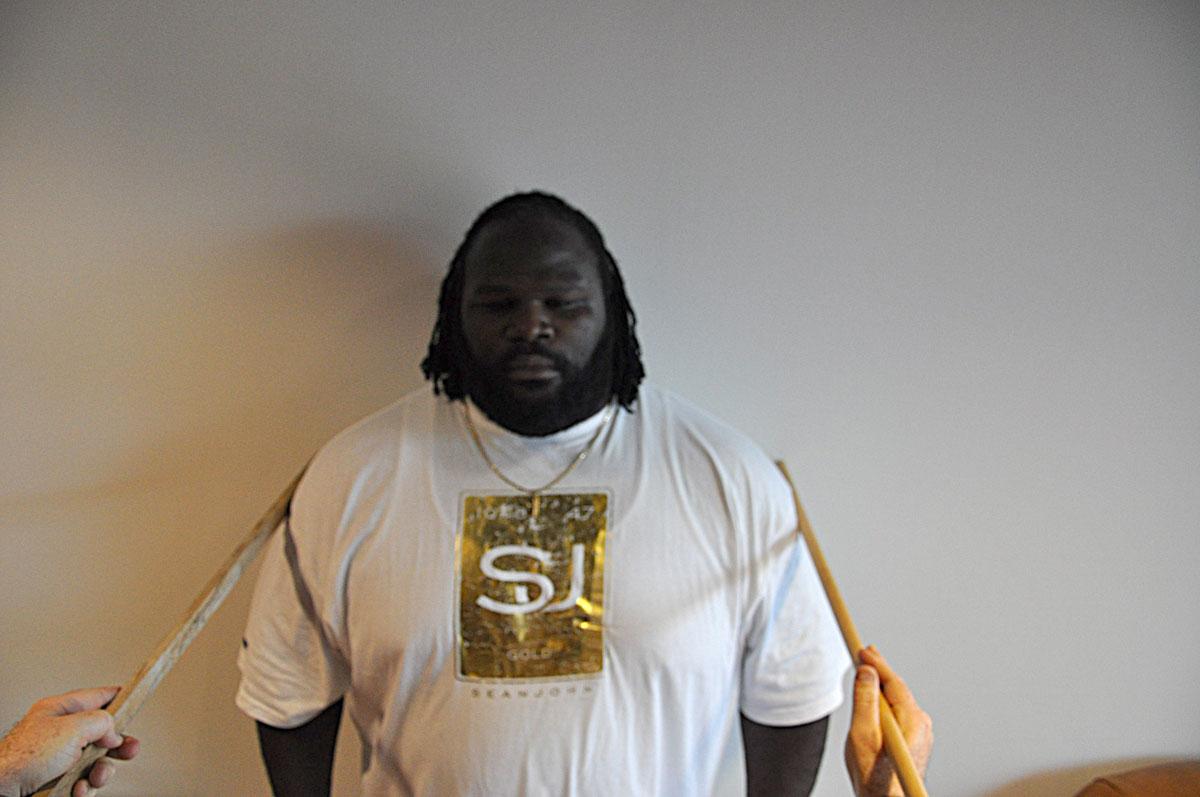 People can look at the photos and see how we did it, but bear in mind that we didn’t have unlimited time to do the measurement, and I’m going to try to use another, more precise technique the next time Mark drops by. In any case, the measurement we got was 30.5”, which may not seem particularly unusual to anyone raised on figures of speech like, “His shoulders were a yard wide!” or “He’s as wide as a barn-door!” or on laughable tales like Angus MacAskill, the 7’9”, 450 pound “Cape Breton Giant” having a shoulder-width of 44”! (Having seen a wood carving of MacAskill at the Armoury in Halifax, Nova Scotia based on the measurements given in a book about the famous giant, it’s clear that his 44”-wide shoulders look far, far too wide even for a man almost 8’ tall. The figure looks cartoonish because of the impossible proportions. What’s more, when I visited the MacAskill Museum in Cape Breton, Nova Scotia I examined a life-sized poster photograph of him; he didn’t appear to be particularly broad-shouldered for his purported height.)

As for modern iron game legends, one of the most enduring is that of Chuck Ahrens, a man who grew up and came to fame in the Los Angeles area in the late 1950s because of his great upper body strength and shoulders which looked even broader than they were since his legs were relatively small for a man whose weight varied from a bit less to a bit more than 300 pounds. As for the exact width of Ahrens’ shoulders, a 1957 issue of Iron Man reported that Ralph Bass had convinced Ahrens—a notoriously camera-shy man who never appeared in public without wearing a thick, long-sleeved shirt—to allow his shoulder-width to be measured by calipers. Bass stated that Ahrens’ shoulders were 26 5/8” wide and that most of the other bodybuilders and lifters he measured in the beach area had shoulders between 20”-21” wide. (Bear in mind that this was 1957 and the dramatic impact on muscle-mass produced by anabolic-androgenic steroids would produce had not as yet occurred.)

Seen in this light, Mark’s width of shoulder—particularly since his was also created without the “benefit” of the use of tissue-building drugs—is a good deal more exceptional. As to whether any other non-obese iron gamer has had wider shoulders I’d be hard-pressed to say, but there are a number of people who come immediately to mind. They deserve consideration. One such man is the 6’7”, 440 pound French-Canadian strongman Dominic Filiou, who seen up close is breathtakingly large while still retaining an proportionate physique. Unfortunately, he’s not breathtakingly strong. Another would be the 6’11” Dwight Howard, the outstanding young center for the Orlando Magic whose amazing shoulders and leaping ability have given rise to the nickname “Superman.” Yet another is Paul Wight, a WWE wrestler and friend of Mark’s who performs as “The Big Show.” Wight is approximately 7’ tall, mildly acromegalic, and has weighed between 400 and 550 pounds during his long, successful, and still-continuing career. At this point “Show” has dropped a lot of weight and no longer trains with either regularity or seriousness, but there was a period about 8-10 years ago when he trained his upper body and produced a body that was much more well-shaped and broader-shouldered than that of the larger-boned Andre the Giant.

No doubt readers will remember other men who deserve to be on this short list of history’s broadest-shouldered men, and I’d enjoy hearing from anyone who has an addition. As for Mark, he may not be the broadest, but he’s a real shadow-caster. 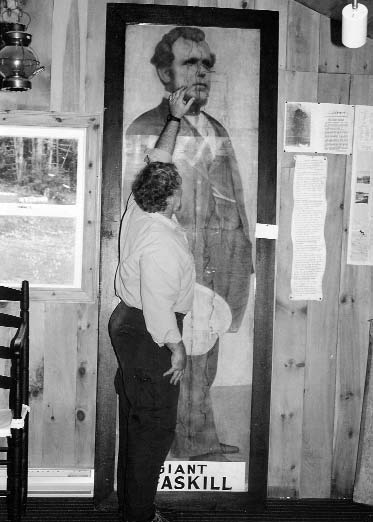 The Double Gift of Doris BarrilleauxThere and Back Again